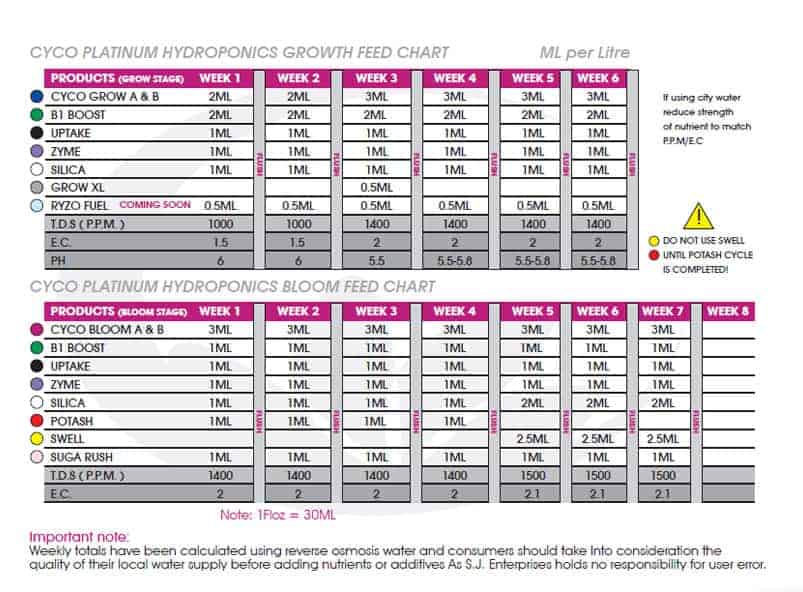 Q: How can I tell if I have a soil-less medium for hydroponic feeding or a potting mix for use with the soil
feeding chart?
A: Turn the bag over and read the directions. A potting mix or soil will typically instruct that feeding is not needed anywhere
from two to four weeks after planning. Follow the instructions on your medium and monitor your plants closely. Start
introducing Cyco Platinum Series at the end of the recommended no-feeding period or when deficiencies start to occur.

Q: Is Cyco organic?
A: Organic compounds are not available to be taken up into the plant. Soil biology is relied upon to break down organic
matter into inorganic minerals which can be absorbed through the roots. Cyco Platinum Series uses Analytical, Pharmaceutical,
Technical or Food Grade minerals so your plants are getting nothing but the pure minerals they need for abundant yields
and vibrant growth which are guaranteed to be contaminant free.

Q: Does Cyco Coco Coir contain peat moss?
A: No. Cyco Platinum Series Coco Coir contains no peat moss. Coco Coir is another term used for the coconut fibers that are
harvested and then used making coconut coir based growing mediums.

Q: You have two bloom bulking products, Potash and Swell. How do I use them properly?
A: Potash is used during the first four weeks of flowering not in conjunction with Swell. After week 4 passes, give your plants
a dose of plain water and then start them on Swell this time without Potash for week five, six and seven/

Q: After every week it says flush and it also says to flush during week eight of flowering. What do I do?
A: The flush in between weeks is a single watering using just plain water wherein you continue afterwards feeding
according to the feeding chart. During week eight, you water with plain water the entire week until harvest.

Q: I mixed the nutrients to the chart using reverse osmosis water but my ppm is off by almost 400 ppm.
What did I do wrong?
A: You did nothing wrong! Ppm (parts per milli0n) is derived from EC (electronical conductivity). Notice the EC target
readings on the feeding chart as well. The meter gets ppm by multiplying the reading which it senses in EC by either
500 or 700. If you have a ppm-500 meter, you’d read 1000 ppm at 2.0 EC which is correct for say week 4 in flowering.
The charts says 1400 because Cyco uses the ppm-700 scale (2.0 EC * 700 = 1400 ppm) We always recommend when
possible a meter that reads EC.